If you have never built a successful business, you might think the dream of building a profitable company is something that you won’t ever be able to achieve. If you’ve tried to start a business that didn’t work out, you might think you just don’t have what it takes to build a profitable business. You […] 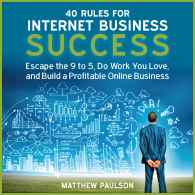 When I launch a new product for any of my company’s brands, I’ll develop a product offering, identify the pricing, create a landing page and write a series of marketing emails to promote the product. The end goal of product launches is to convert email subscribers into customers and to create revenue. When it came […]

I had the opportunity to chat with an entrepreneur who is building a mass-market physical product a few weeks back. We’ll call him Fred for the sake of this discussion. Fred has been working on his project for over a year and has put the vast majority of his business effort into perfecting his product […]

A while back, my wife Karine received an email from one of her former co-workers at Terry Redlin Elementary. The co-worker’s husband, Todd Kolb, was building an Internet business and wondered if I would be willing to meet with him to see if I had any suggestions to help grow his company. At first I […]

It’s been a month since 40 Rules for Internet Business Success has come out. Now that the launch of the book is in the rear view mirror, I thought it would be a good time to discuss why I wrote the book, the content creation and editing process, how I marketed the book, and some other […]

One of the lessons that I’ve learned during the last two years that you really need to focus on the handful of things that you’re better at than anyone else and prune out everything else if you’re going to be successful in business. Earlier this year, I shut down my consulting business and a variety […]

When you work for an employer, you know how much money you’re going to earn in any month. You have a set salary or hourly rate and earn approximately the same amount of money each month. You also operate under the assumption that you’re going to have the same job or a similar job indefinitely […]

I have a reputation for reading a lot of books. As a result, I often get asked for book recommendations, which I’m happy to provide. In order to streamline the process, I’ve decided to publish a list of books that I read every quarter in 2014. I had previously published the books that I read […] 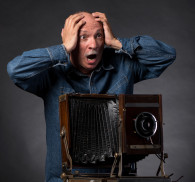 A while back, I bought a DJI Phantom 2 Vision+ aerial drone and have taken some pretty cool pictures and video with it. Soon after I started posting my work, several people asked if they could pay me to take aerial photos of their businesses and property on their behalf. I also had several people […]