I’ve had the opportunity to work with Trinity Lutheran Church and West Center Baptist Church, both of Madison, SD, develop new web presences during the last several months.: 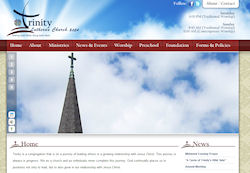 Trinity Lutheran Church is an ELCA congregation. Their new website launched today. I had originally created them a website while I worked for Logic Lizard, a company started by a group of professors at DSU in early 2007. At the time, I had built them a custom content management system which served them well for quite a while. They approached me early this fall and asked if I would be willing to help them develop a new website. With the assistance of Jason Shea, one of my coworkers at Factor 360, we were able to develop a modern design for their website and move their site to a new content management system (360 WebCMS). Their administrative assistant, Lisa Rogers, also helped immensely by moving over their content from their existing platform into the new website’s content management system.  I have had a great relationship with members of Trinity’s staff for a number of years and look forward to working with them in the future as well. 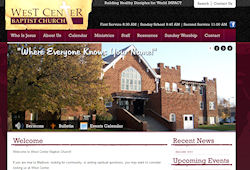 It’s been a great pleasure to work with both congregations in helping get them setup with new websites.

(Note: I do offer discounted and free website services to churches and non-profits when my schedule permits. Feel free to contact me if you would be interested in my assistance.)