Home» Blog » What I Learned Losing Twenty Pounds in Four Months
Posted on August 28, 2017 by matt in Blog, Email Notifications, Everything Else 1 Comment
Tweet 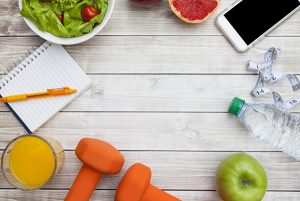 Health and fitness is not a subject that I thought I would ever find myself writing about. I’ve never enjoyed strenuous exercise and have had an unhealthy appetite for soda, fast food and candy for as long as I can remember. I’ve been at least twenty-five pounds overweight since I graduated college. I had the ultimate “dad bod” and had largely resigned myself to the physical condition that I was in. Toward the end of April, I stepped on the scale and saw the number 181.6. I had gained thirty pounds since graduating college nine years ago, and I decided that it was time to make a change and establish some healthier habits.

Like everyone else, I pretty much knew the basics of what I would need to do. I would need to exercise more. I would need to make healthier food choices (whole foods, fruits, vegetables, lean meat, far fewer processed grains and much less junk food). I also knew that I would need to consume fewer calories so that my body would burn off fat and that exercise would play an important role in weight loss (but not in the way I thought). I also knew that I couldn’t just follow a fad diet for a couple months, because becoming healthy over the long term is more about establishing healthy habits than it is about limiting one’s consumption for a short period of time.

Last week, I stepped on the scale and saw that I weighed twenty pounds less than what I did at the beginning of this journey. I am still about 6.5 pounds away from my goal weight of 155, but the finish line is within sight.

Here’s what I learned along the way:

If you’ve made any dramatic improvements in your weight or health over the years, I would love to hear about the strategies that you used and what worked for you in the comments below.