Last fall, I penned an article titled “What Would a Startup Ecosystem Organization Look Like in Sioux Falls?” which discussed the different components that the startup ecosystem in Sioux Falls would need to be operating at full capacity. Our community has made a lot of progress since then with the launch of Startup Sioux Falls, the new Hey Sioux Falls event and the return of TedX to Sioux Falls. The Startup Sioux Falls Facebook Group is flourishing and there are now two podcasts highlighting the stories of entrepreneurs in our community on a regular basis. In some ways, our small business and startup community is stronger than ever, but there are some significant gaps and opportunities for improvement that remain. 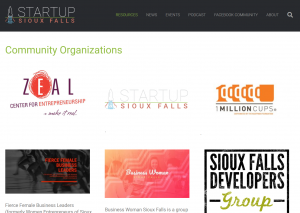 Startup Sioux Falls maps the 30+ ecosystem organizations that make up the small business and startup ecosystem in our community.

When someone decides they want to launch a business in Sioux Falls, there’s no clear first step for them to take. There are at least 30 different organizations that support entrepreneurs in our community, but it’s not clear where anyone should start if they want to access those resources or become part of the small business and startup community. Currently, it’s a mix of Zeal’s team and myself that fields these coffee meetings, provides some initial business feedback to the entrepreneur and points them to other resources that may be helpful to them on their journey. I would estimate that we currently field 2-5 of these inquiries depending on the week.

It would be great if there was a dedicated person that could be the central first point of triage for new entrepreneurs that are looking for help. This person could meet with new business owners, evaluate their needs, and connect them to institutional resources and mentors that could help them on their entrepreneurial journey. They would probably also be responsible for managing a team of seasoned business owners and entrepreneurs that would volunteer to meet with aspiring business owners and provide some basic mentorship. This is probably a half-time position that would be a good fit for a recently retired entrepreneur or a non-profit executive that has experience working with the business community. Under the current structure of the business community, this position would probably need to be housed at Zeal and funded through Forward Sioux Falls or a multi-year contribution from a private donor.

While no person or organization can “do the work” and make a business successful for an entrepreneur, it can be incredibly helpful to get assistance with specific business functions, such as developing financial statements, incorporation your business, applying for a sales and use tax license, learning how to hire your first employee, or applying for a business loan. There are organizations out there that will help with these things, but many people don’t know about them. A startup triage specialist could make sure that every small business owner and entrepreneur has access to every resource and mentor available to them.

There’s a mantra in our region that there aren’t enough venture capital dollars available to invest in businesses, but I’m not 100% sure that’s true. When a great business comes along, dollars seem to show up out of thin air. A local venture capital firm recently raised $5 million in two weeks for a medical device company, which I suspect primarily came from investors within a 100-mile radius of Sioux Falls. I helped raise $1 million for Prairie Aquatech as part of a larger raise in a 30-day period, but they already had intellectual property and a demonstration-scale manufacturing facility. Once a company has demonstrated traction and has a clear path to a potential buyout or public offering, local investors are willing to get out their checkbooks without a second thought.

If there is a shortage of capital in our region, it’s for early-stage small businesses and startups. Local restaurants, retailers, service companies and other small businesses are often funded with a mix of “friends, family and fools” dollars and an SBA loan. If you don’t have the down payment for an SBA loan, can’t borrow the money and can’t get anyone else to give you the money, there’s no magic pot of money I can point you to that will fund your business. Most of the time it just doesn’t make sense for an individual investor to take a risk on a first-time small business owner that wants to open a restaurant, a retail store or a local services business, because the risk-reward ratio just isn’t there and the owner has no track record of success.

Entrepreneurs often bemoan the lack of capital available for early-stage entrepreneurs, but the problem isn’t exclusively on the investor side either. Business owners often have unrealistic expectations for how much venture capital they should be able to raise for the traction they’ve demonstrated, and they often want business valuations that aren’t supported by the actual performance of their company. No investor, especially in Sioux Falls, is going to write a $1 million check for 10% of a company that has no revenue or intellectual property. Yet, it’s not incredibly rare for a business owner to ask for this kind of valuation (at least initially). Business owners need to recognize that they need to show significant progress, traction, and revenue before someone is going to write them a big check to keep growing their business.

It would ultimately better if there were more funding options for entrepreneurs that fund specific types of businesses so that people had more “chances at bat” to get funding for their business. Annie Capital is showing us there’s a place in the Dakota’s for a female-focused venture capital firm, but there are many more verticals that could benefit from an industry-specific capital source. What if there was a retail incubation program that helped retail stores launch and funds their initial inventory? What if there were an incubation and funding organization that helped people launch e-commerce businesses so that South Dakotans can market their products nationally? What if there was a firm focused on investing in biotech companies? There are many possibilities that meld incubation and capital, but each of those possibilities requires capital and a champion to push their cause forward.

Just to begin with, the following ideas are my own and do not represent the thoughts of the Zeal Center for Entrepreneurship, its board, or its staff members.

For as long as I can remember, the Zeal Center for Entrepreneurship has been an organization in transition. Functionally, it’s a commercial office space that houses alphabet-soup government organizations (SBA, SBDC, GOED, etc.), a handful of life sciences and technology startups, companies looking for temporary office space and companies that exist elsewhere and are opening branches in Sioux Falls. I think Zeal does serve a good economic development function with its current model because it serves relocating and expanding companies, but it doesn’t currently serve many small business owners and entrepreneurs.

A relatively small number of startups and entrepreneurs operate out of the 45,000 square foot facility, probably because these people would like to work downtown and there’s no critical mass of community there that make the facility a place that other entrepreneurs want to spend time at. Zeal was built for the needs of entrepreneurs in 2004 and those needs have changed. High-speed internet, printing services, and shared office space are widely available and are no longer competitive advantages for a facility like Zeal. Entrepreneurs care more about community, mentorship, networking, and education. Zeal will need to focus on those things if it is to be successful. 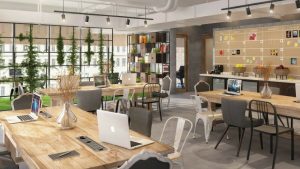 A reconfigurable open co-working space could be used to cater to both co-workers and in-person events such as 1 Million Cups.

It’s probably time for the business community to think what a multi-year transition from Zeal’s current site to a downtown facility would look like. A future Zeal could continue to house the SBA, SBDC, Enterprise Institute, SD Biotech Association, and other relevant organizations and just be the home for these types of organizations. Another option would be to focus on being a coworking and community space and housing exclusively startup entrepreneurs. The Sioux Falls business community could also decide that a centralized facility for entrepreneurship isn’t necessary and focus on building an ecosystem organization like Emerging Prairie (which Startup Sioux Falls would gladly fold into).

I don’t think anyone has fully identified what Zeal needs to look like in the future, but some themes are starting to emerge. First, it needs to be downtown because the community of entrepreneurs wants to be downtown during the workday. The businesses that serve entrepreneurs are also located downtown. Second, it needs to focus less on being office space because the Zeal staff spends too much time dealing with building and tenant issues and has little time left over to create event and educational programming. This probably means that the new facility is half the size of the current one and caters to a narrower type of organizations. Third, it shouldn’t have wet lab space. The demand for Zeal’s lab space has been scarce and those needs are better met by the USD Gear Center, Sanford, and Avera. Fourth, the focus should be on creating a community for and finding ways to help entrepreneurs. This last point should be obvious, but the focus should always remain on the people we are trying to help.

More Sources of Origination for Entrepreneurs

This last gap is going to be the hardest one for our community to get our head around because it’s a gap that may be impossible to solve. Many communities with vibrant technology startup and entrepreneurial communities have sizable universities in them and large technology companies that entrepreneurs spin out of. Sioux Falls just doesn’t have those things. We don’t have a presence from a Microsoft, Google, Apple, Adobe or Amazon that new tech startups can spin out of. Universities also can be a source of spinning out entrepreneurs, but there are probably somewhere between 7,000 and 10,000 university students in Sioux Falls. This number would probably need to triple for there to be enough students graduating each year that wanted to found startups and be part of startup tech companies. This is obviously a long-term problem, but ultimately, we are going to need more students and more technology-driven companies if we want more high-growth startups to come out of Sioux Falls.

I think there’s more interest in developing a vibrant small business and startup ecosystem in Sioux Falls now than at any point during the last five years. With new leadership at Zeal and the SBA, the advent of Startup Sioux Falls and the launch of Hey Sioux Falls, there’s a new buzz in the business community about startups and entrepreneurship. We are making some good strides, but there’s much more work to be done.