These thoughts are my own and are not necessarily those of the Startup Sioux Falls, the Zeal Center for Entrepreneurship or any other organization I may be involved with. 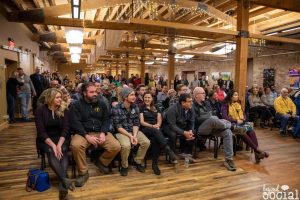 With the launch and initial growth of Startup Sioux Falls behind us, it’s given me a new opportunity to ask, “what’s next?” I have spent some time researching other startup opportunities, talking to business and community leaders and I am beginning to flesh out some ideas regarding where our startup community could go next and how Sioux Falls should think about entrepreneurship moving forward.

Here are four hopes I have for the Sioux Falls startup ecosystem in the next decade:

1. Entrepreneurship must be treated and funded as an economic development function.

Small businesses and startups play an important role in job creation and economic development. By looking at homegrown Sioux Falls companies, like Experity (Docutap), Central Square (Zuercher Technologies), Weisser Distributing, MetaBank, Grand Prairie Foods and others, it should be apparent that fostering new business creation is as important as recruiting employers to relocate to Sioux Falls and other economic development efforts. My hope is that the business community will recognize the need to make greater investments in startup ecosystem efforts, primarily by increasing funding for the Zeal Center for Entrepreneurship through the next Forward Sioux Falls cycle and through additional private contributions.

The Zeal Center is the “designated entity” for entrepreneurship activity by the Chamber of Commerce and the Development Foundation, which makes it a natural destination for expanded startup ecosystem efforts. Operating at full capacity, I believe that the Zeal Center could maintain its current 45,000 square foot building, run a thriving accelerator program, hold monthly educational workshops, serve as the hub for the startup ecosystem, facilitate angel investments, hold community networking events and collaborate with local schools to increase entrepreneurship education. In order to fully execute on this vision, the Zeal Center probably needs at least two more full-time staff members. In my opinion, the Zeal Center would be well served by a person that can manage the operations of the Zeal building and another person to serve as an entrepreneur in residence whose sole job is to work with current and future business owners.

2. We need to double the number of college students in Sioux Falls.

University students play an important role when connected to a thriving startup ecosystem. They often launch new businesses themselves, find themselves working at startups and become key volunteers in the startup community. Since recent graduates are young, full of energy, often unattached and ready to take on the world, they are in the perfect position to help grow startup businesses. The book Startup Communities highlights how U.C. Boulder and the Boulder startup community have worked together to connect college students and graduates with startup businesses through recruitment and community events. Emerging Prairie has also done a great job of engaging NDSU in recent years, by giving students discounted memberships to their coworking space, regularly speaking on campus and inviting NDSU students to their events.

The Sioux Falls Startup community could certainly do a better job of engaging Augustana University and the University of Sioux Falls with its events and programming, however, there just aren’t a lot of students that engage with the startup community in Sioux Falls. This is somewhat understandable because many of them are pursuing liberal arts, teaching and medical degrees and entrepreneurship probably aren’t in their futures. It would be fantastic to have another 5,000 to 10,000 students at DSU each year pursuing programs in business and technology that would encourage them to launch tech startups and other new businesses. I am hopeful that growing business programs at our two local universities, a renewed energy at the USD’s Community College for Sioux Falls and a greater partnership with DSU will increase the number of students in our city in the next decade and that some of them will stick around and launch businesses in our community.

3. DSU, the State of South Dakota and the City of Sioux Falls should try to launch a cyber-security industry in Sioux Falls.

Over the last decade, Dakota State University has become a national center for cybersecurity training and research through its partnerships with the National Security Agency and the Department of Homeland Security. DSU already has a few dozen researchers working at its MadLabs research facility which opened last fall and it sounds like there are even more announcements in the works. Between the growth of its student population, the creation of new degree programs, the federal partnerships it has developed and its new research base, the growth, and transformation of DSU has seen over the last decade cannot be overstated.

Eventually, DSU’s growing cybersecurity ecosystem will spill over into Sioux Falls and create high-paying technology jobs in our community. If South Dakota were able to land a major technology employer to employ DSU’s graduates, students could stay in their home state instead of moving to the coasts where most cybersecurity jobs are located. One anchor business that employs a few thousand cybersecurity workers could eventually spawn a local ecosystem of multiple cyber-security and other technology-driven companies.

My hope is that DSU will continue to provide leadership to the emerging cybersecurity industry with support from the governor and funding from the state legislature. Ideally, the Sioux Falls business community will embrace DSU’s efforts and be willing partners when DSU has capped out the number of cybersecurity positions that it can realistically create in Madison.

This is an anecdotal impression on my part, but it seems like there are just fewer people trying to launch high-growth and technology startups in Sioux Falls compared to five years ago. We have plenty of people launching new retail stores and services companies in Sioux Falls, but I just haven’t heard nearly as many pitches for tech startups and growth companies in the last couple of years. Falls Angel Fund II struggles to find qualified companies in the Sioux Falls community to invest in and has to look at companies in Rapid City, Fargo, Minneapolis and Omaha to deploy its capital. Most of the 1 Million Cups speakers we have had in the last year are restaurateurs, retailers and local services companies.  Zeal also struggled to find companies that were ready for its accelerator program in the last couple of years as well.

I’m not certain what’s changed about our startup community, but it just seems that fewer people are swinging for the fences and trying to build companies that could have a national customer base. Perhaps the spillover effect from the rapid growth of Facebook, Google, Amazon, and Apple has finally worn off. I haven’t heard anyone tell me they are trying to launch “the next Facebook” in several years now. Maybe people see starting high-growth companies as too challenging or maybe it’s just not as cool to be involved in startup land anymore. The strong economy could also lead people to be too comfortable in their salaried positions, not seeing much of a need to take a risk and start a new company. I doubt any single theory will explain the shortage of new founders, but there does seem to be a trend at a play.

Perhaps we need a next Facebook or Google to disrupt the technology industry again and remind would-be entrepreneurs that opportunity abounds. Maybe we need another Steve Jobs or an Elon Musk that can make startup creation cool again. A few new local success stories of people that started businesses from nothing would be helpful too. Whatever it may be, we need a catalyst that inspires the next generation to say, “maybe I could do that too.”

In the last ten years, we have seen the launch of new angel investment funds, the growth of startup community events, the launch and failure of several coworking concepts, the maturation of companies like Docutap, Zuercher Technologies, and Weisser Distributing and re-invention of the Zeal Center. I don’t know what the startup landscape will look like ten years from now, but there are significant opportunities for growth and challenges that will reshape the startup ecosystem in our community.

2 comments on “Sioux Falls 2030: Four Hopes for the Startup Ecosystem”