At the beginning of the year, it looked like 2020 was going to be a big year for the Sioux Falls startup community. We had gotten into a groove of running 1 Million Cups weekly, doing monthly startup events for Startup Sioux Falls and Zeal, and were planning a couple of bigger events as well. The Facebook group had great engagement and the Zeal Center was (and still is) at near capacity. Falls Fintech had launched its first cohort and the Falls Angel Fund II had just made its first two investments.

When the United States realized it could not escape COVID-19 in early March, the events and other programming we were working on came to a screeching halt. We followed the lead of other business organizations in Sioux Falls and initially cancelled our events in March and then started doing virtual events on Zoom in April for both 1 Million Cups and Startup Sioux Falls. Initially these had some great engagement as our community members were eager to reconnect with one another. We even saw some new faces of people that wanted to attend our events but could not make it down in person.

Our online events seemed like a great alternative to in-person events at first, but engagement started to decline as restrictions were lifted and the summer months came. After about 3 months of online-only meetings and events, our community members were tired of constant Zoom meetings. We decided to press the pause button on 1 Million Cups in July and August (normally we just take the month of August off) and did not plan any Zeal or Startup Sioux Falls events during July or August. 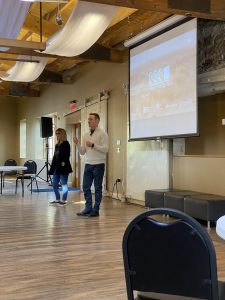 1 Million Cups kicks off with a new hybrid approach

We are now finally restarting in-person events in September, albeit with many modifications. We are doing a hybrid version of 1 Million Cups at the Museum of Visual Materials with Pinnacle Productions producing and streaming the event for us. Feel free to join us every Wednesday morning this fall at 9:00 AM at the Museum of Visual Materials (but please, bring a mask if you plan on coming). We are also streaming 1 Million Cups on Facebook and YouTube and will be posting the recordings to the Startup Sioux Falls/Zeal website.

In terms of annual events, Innovation Expo will be happening on October 22nd at the Hilton Garden Inn in downtown Sioux Falls as a hybrid event. We decided to push Hey Sioux Falls off until April of 2021 because we didn’t feel like it was the right time to celebrate and didn’t feel like we could put on the event that we wanted to do in the current environment.

On the investment and acceleration side, Falls Angel Fund (and its sister funds across the state), only missed one meeting due to COVID-19 and has met twice since then. Falls Angel Fund has made two investments since the onset of COVID-19 and the other South Dakota angel funds are actively hearing deals and making investments as well. We plan on holding an investor luncheon prior to Innovation Expo where we will have members from all the state’s angel funds present. Three companies are currently lined up to make pitches.

Falls Fintech, a startup accelerator program run by Central Payments, continued its programming throughout COVID-19 on a virtual basis. Its participants were in Sioux Falls for only a week before COVID became a serious issue in the country and were sent home. Nikkee Rhody and her team were able to quickly pivot and turn the program into a virtual program. Their first class finished over the summer and Falls Fintech is now running a second cohort of companies that were briefly in Sioux Falls in August. We featured their companies at 1 Million Cups in September and look forward to seeing how they grow and develop.

The Zeal Center for Entrepreneurship is a 45,000 square foot multi-use facility that serves as a center of business activity for aspiring early-stage businesses located in Northwest Sioux Falls. The building was mostly full prior to COVID-19 and had a couple of tenant companies and coworking members either downsize or move out during the initial wave of COVID-19, but it was not a major impact to the organization. During the summer, Zeal has grown its team by hiring a building manager, a community manager, and a new intern. Zeal has some exciting programming in the pipeline that will hopefully be announced soon. 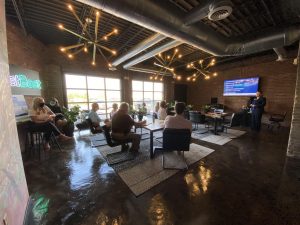 A recruitment event for SCORE is held at MarketBeat’s office.

I cannot say enough good things about South Dakota SBA District office during COVID-19. Director Jaime Wood and her team served as a valuable resource for companies looking for PPP loans, EIDL loans and other federal aid programs. She was able to quickly ramp up the team at the South Dakota SBA District office to help manage their new responsibilities. The SBA in South Dakota just wrapped up a series of events for small business week and are helping reinvigorate SCORE in South Dakota, a volunteer network of business mentors, as well.

I have thought for a while that South Dakota needs a network of small business and startup mentors that are willing to make themselves available to prospective and new business owners looking for advice and assistance. When I heard that the SBA was trying to reboot the SCORE network in South Dakota under the leadership of Julie Johnson, I agreed to become a SCORE mentor and we held a small recruitment event for SCORE at the MarketBeat office last week as well. I am hoping that we can build a network of business leaders and subject matter experts through SCORE over the next year to create a one-stop-shop for anyone that needs business advice or mentoring. While I am not in charge of this effort, I plan to help push this initiative forward.

The unfortunate reality is that the remainder of 2020 and 2021 will be a rebuilding year for many event and programming-driven organizations. That will be true for 1 Million Cups, Startup Sioux Falls and the Zeal Center as well. Until we can safely hold events, workshops, and mixers again without capacity limits and safety restrictions, we will be treading water to some extent. What I am encouraged by is that we have a real solid foundation of volunteers and leaders in the startup community that are committed to its growth and success and hopefully we will be able to identify some new initiatives in 2021.