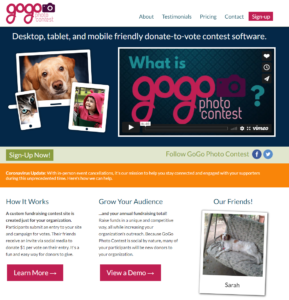 One of my goals for 2020 was to wrap up some entrepreneurial side projects so that MarketBeat is the only company that I have an operating role in. There were a couple of little websites that I got rid of and a real-estate investment club that I was part of that disbanded, but GoGo Photo Contest was my only side business that generated a meaningful amount of revenue. GoGo Photo Contest helps animal shelters raise money through an online fundraising platform. It is a great business doing great things for animal welfare groups across the country, but it just did not make sense for me to continue to be part of the company given my limited involvement and my continued focus on MarketBeat.

I sold my ownership stake in the company to the other two co-founders, Jason Shea and Stevie Shea, at the end of the last year. They had been running the company for several years without operational help from me. They were not taking a salary outside of their ownership distributions. I did not feel it was fair for me to get paid the same as they did when they were doing all the work, so I sold my stake to them for less than market value as a way to compensate them for their work over the years and set them up for future success. Here’s the story of the business.

In 2005, the Sioux Falls Area Humane Society approached Jason and Stevie about taking their photo contest online. Their contest had a donate-to-vote concept, where anyone that donated $1.00 to the humane society, would get one vote in their photo contest. The idea is that people would submit pictures of their pets to the photo contest and encourage their friends and family members to make a donation in honor of their pet. At the end of the contest, whoever’s pet received the most votes (or the most donations), would get a donated prize. These contests were often tied to calendars, with the top vote-getting animals featured in the humane society’s annual calendar.

Jason, Stevie and I all worked at a marketing firm in South Dakota. Jason joined the company before I did and brought the photo contest concept with him to the firm. The story I was told was that the company we worked for was supposed to buy the photo contest business and associated intellectual property, but there was never any payment made or contract signed. The company we worked for just kind of subsumed the photo contest business and did it quite well. Fast forward a few years, I left the company to build MarketBeat. Jason left to go work at another marketing agency. Stevie eventually came to work for me at MarketBeat.

We all had lunch once day in 2013 and decided to start up the photo contest business again under a new name. Our former employer did not like that idea, which ultimately led to the one and only time I have ever been sued over a business dispute. The lawsuit went nowhere, and we ultimately settled it for a nominal amount of money. Then, we got to work building GoGo Photo Contest out as a business.

My involvement in GoGo Photo Contest was helping Jason build out the software platform, accounting, and marketing. The marketing strategy I developed was simply cold-emailing animal welfare groups and asking them if we could help them raise money for their non-profit. After we had ran a few dozen successful contests, word of mouth took over and the platform started to take off. There wasn’t a lot of ongoing development work needed, and the marketing strategy was set in motion, so my involvement in the company waned after the first couple of years.

Jason and Stevie continued to execute on the business, nailing contest after contest. Not every contest was a success, but they have run more than 2,400 contests over the last seven years. GoGo Photo Contest helped animal shelters across the country raise more than $18.5 million during my time with the company, mostly thanks to the innovative ideas and consistent execution that Jason and Stevie brought to the table. GoGo Photo Contest had its best year ever in 2020, and I wish them nothing but continued growth and success.

As with every business, you learn lessons that stick with you as you go. Here are a few lessons I learned during my time as an owner of GoGo Photo Contest:

My time with GoGo Photo Contest has come to an end, but it was a powerful and formative journey. Hopefully, these lessons will help you with any business partnership you are considering. And, I wish Jason and Stevie great success with their business.