If you were to tell yourself from two years ago that you would be wearing masks whenever you are out in public, that people would be migrating to different parts of the country because of public health lockdowns, and that your biggest hope for 2021 will be to get a new vaccine that was just recently authorized for public use by the FDA, you probably would not believe yourself. The world has changed a lot in the last 13 months. We are all different people for better or worse because of our shared experience over the last year.

We will leave some of our old pre-pandemic habits behind (RIP dress clothes), pick up some dormant activities that the pandemic made impossible, and recognize the value of human connection more than ever before. For our family, it means more travel, more time with loved ones, and a return to more normal patterns of work. Like everyone, we are glad that there is a vaccine available and can move on with life.

There is a lot to share in this quarterly update. There are a variety of community projects that I have the privilege of working on that are coming to fruition this summer and some other updates to share as well.

Here is what has been going on (in no particular order): 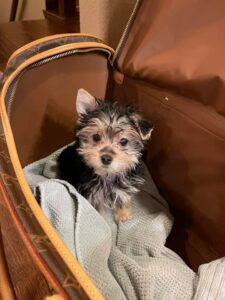 We got a puppy! After many months of Karine campaigning, we adopted a little female Morkie (half Maltese, half Yorkie). She was born in November and joined our family in January. We named her Mindy. We have never had a dog before, so having Mindy in the house has been an adjustment and a learning process for all of us. Karine and the kids love the dog, and she is growing on me, too.

Karine and I will be celebrating our ten-year wedding anniversary on June 18th. To celebrate, we are planning on taking a vacation to Sanibel in Florida this summer. I will also be in Florida for Financial Marketing Summit in June along with some MarketBeat employees. Karine and I will likely make an August trip to Las Vegas.

Ady turns five years old this month, which is also hard to believe. She will have one more year of Early Childhood next year and then will be in Kindergarten in the ’22-’23 school year. While she is not like most kids, Ady brings immense joy to our family, and she is always surprising us by finding new ways to communicate and demonstrate her intelligence.

The MarketBeat Burger project has come and gone. We got second place overall in the contest, and I am told that Papa Woody’s beat Chef Lance’s by a very narrow margin. MarketBeat made a donation of $31,000 to Call to Freedom for their work and their new project, Marissa’s House, which will provide emergency shelter for victims of human trafficking.

Each Leadership Sioux Falls class has to complete a community service project for the benefit of the Sioux Falls Community. As a group, we decided to raise $100,000 for new playground equipment in Sioux Falls. Steve Hildebrand’s Promising Futures Fund is also raising additional dollars for improvements at Hayward Park and the Sioux Falls City Council is likely to authorize spending for additional improvements as well. More than $75,000 has been raised toward our $100,000 goal and we hope to hit our fundraising goal by May 1st. You can make a donation toward this effort here.

March was an eventful month for the Sioux Falls Startup Community. We celebrated Entrepreneurship Day on March 3rd, with an official proclamation from the Mayor’s Office. We had record attendance at 1 Million Cups, which featured both Lemonly’s John Meyer and ClickRain’s Natalie Eisenberg. We also had a Startup Social at Fernson’s tap room and announced the return of Hey Sioux Falls on May 20th. We had a Morning Marketing Party event on March 25th and an Office Hours event as well.

Today (April 6th), we’re doing an event called Pitch Prep Hour that will teach founders how to find investors and make your investment pitch to them. It will be recorded if you missed it. There may be another pitch night sometime in April or May, but that event has not been finalized yet. 1 Million Cups continues to be virtual during the month of April, but we are hoping to return to an in-person format soon. Zeal wrapped up its first session of CO-STARTERS and is starting another cohort soon. There is also a lot going on behind the scenes to set the startup community for long-term success, so stay tuned.

Cresten announced that it was building a large new apartment complex near 69th and Southeastern that I am an investor in. We are also expanding one of our existing projects, Edgewater Villas. Our strip mall that will contain a Starbucks and Capriottis is nearing completion. We closed on a Starbucks location in Ankeny, IA). We also have some retail projects that are under contract that are set to close in the next month or two and a bunch of other apartments, mix-used developments, and retail projects in the works. You can read about some of them here.

One thing that I have learned about commercial real estate investing is that things are always in flux. Deals come together. Deals fall apart. Deals get moved up or pushed back depending on a variety of factors. There are a lot of projects that could happen, but nothing is really a done deal until loan documents are signed and a real estate closing occurs. For this reason, it has been especially important to have dry powder (cash) sitting around in the short-term and not be fully invested.

Overall, I remain bullish about commercial real estate as an asset class because of my belief that significant and sustained inflation is coming to the United States. We are already seeing significant price appreciation in real estate, precious metals, collectibles, art, and cryptocurrencies. Anything that is not easy to reproduce is going up in price and I believe that trend will continue as long as the government continues with its aggressive economic stimulus.

We have three new employees starting during the month of April. Between our employees and contractors, the global MarketBeat team is about 30 people. Andrew Peschong will be our new technical support manager and will be leading our support team. Rebekah Van Maanen has been hired as a web developer and Elizabeth Semrau has been hired as a customer support specialist. Our next hires will likely be an assistant editorial manager and a finance manager.

We experienced some explosive growth during the Gamestop and AMC craze that happened in January and February, but things have settled down a bit since then. We are currently pacing at an annual run-rate between $25 and $30 million in top-line revenue. We launched a new website that tracks insider buying and selling activity called InsiderTrades.com and have a brand new mobile app that will be coming out later this Spring thanks to the team over at Hypercolor Digital.

Falls Angel Fund II had its bi-monthly meeting in March. We heard three pitches and voted to invest in all three companies. Between those three deals, we will be putting more than $530,000 to work. These deals have not closed yet, so I am not able to talk about them publicly. I am personally investing in one of these deals and it will be the largest angel investment check I have ever written, so I am excited to share about that when everything is finalized.

With the significant checks that Falls Angel Fund II is writing, we may only be able to write one or two more investments in our current fund. This could mean the launch of Falls Angel Fund III is on the horizon. It could also mean that there are new types of funds that could be launched in South Dakota, but those discussions are still pretty early.

DSU recently recognized Karine and I as its “Philanthropist of the Year” for our work in getting the Paulson Cyber Incubator & Entrepreneurship Center off the ground. The Paulson Center will have a ribbon cutting ceremony this Saturday along with a student pitch competition. MarketBeat also ranked in the 2021 Inc. 5000 Midwest Regionals, with the fastest growth rate of any South Dakota company featured on the list. I’m humbled by all of the recognition that Karine, I and MarketBeat have received in the last year.

I think that covers pretty much every project that I am currently working on. This Spring remains a busy season of life, but things are good at home and at work. There’s a lot of stuff I’m working on that hasn’t yet been publicly announced, so stay tuned.