2022 is shaping up to be a year of significant transition both personally and professionally. Our daughter Ady will be entering Kindergarten this fall, marking the first time we have had two kids in school full time since Micah was born in 2012. As MarketBeat grows, My role at the company is transitioning away being from software developer and marketing strategist to being a team leader. The launch of Homegrown Capital has allowed me to transition from being an individual angel investor to being a venture capitalist. Many of my long-term volunteer board positions, including both Sioux Falls Seminary and Startup Sioux Falls, will be turning over in the next 12-24 months.

These transitions have led me to several important questions:

These are all important questions, and I don’t have answers to any of them today. As I consider the various personal, professional, and volunteer roles that I serve in, I recognize that I am in the middle of a season of change. In this quarterly update, I discuss some of these changes and try to offer a glimpse of where I’m headed both personally and professionally. Without further ado, here’s my quarterly update for the second quarter of 2022. 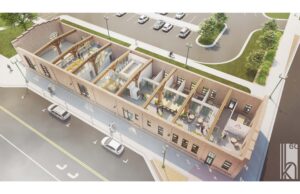 To say this project has been a lot of work would be an understatement. It is the most complicated and challenging non-profit initiative I’ve ever taken part of, requiring the participation of city government, state government, both hospital systems, Southeast Tech, the Chamber, the Development Foundation, and Forward Sioux Falls. In terms of putting the deal together, all the key pieces are in place. Startup Sioux Falls is working with Koch Hazard and Journey Group to finalize our building design, and hopefully we will begin construction later this Spring. MarketBeat will likely be a major sponsor of the remodeling project.

Working on this project has meant I’ve had to give up a lot of the ways that I had previously been contributing to the startup ecosystem. I no longer host or help plan startup events, outside of 1 Million Cups. I no longer create startup ecosystem content or maintain the Startup Sioux Falls website. I no longer serve on the Zeal/SUSF finance committee. All my startup volunteer time has gone to this project, and it’s been a lot. I’m committed to seeing this project through to fruition, but it will probably the last major initiative that I work on with Startup Sioux Falls as a board member.

Being a startup community leader is a young person’s game. As I grow older and as my business matures, I find it harder to relate to entrepreneurs that are at the very beginning stages of their founder’s journey. It’s also impossible to organize startup events on nights and weekends when you have small children at home. New founders today face different business and economic challenges, have access to different tools and opportunities, and have more access to technology and capital than I did when starting my business 16 years ago. In the next year or two, it will be time for me to pass the mantle of day-to-day startup community leadership to a new generation of founders. 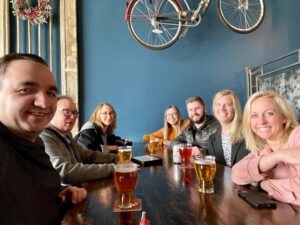 MarketBeat faces a much different business environment than it did one year ago. In early 2021, MarketBeat’s numbers saw an all-time-high across the board thanks for the market frenzy caused by the Gamestop and AMC short squeeze. In 2022, the market has been rocked by inflation and by Russia’s invasion of Ukraine. When the market takes a significant dip, people are hesitant to look at their stock portfolios, and that means websites like MarketBeat tend to suffer. While the size of our market has shrunk (at least temporarily), we are still forecasting a slight increase in top-line revenue in 2022 compared to 2021 (probably $26-$27 million in total) because our conversion and monetization strategies continue to improve.

We welcomed two new team members during the first quarter. We added Elizabeth Schiefen, who is both a Mitchell High School and Dakota State University alumni, to our software development team. We also brought on Laycee Kluin as a digital marketing strategist to our marketing team. This puts our headcount at 13 employees and 11 remote contractors who regularly do work for MarketBeat. It will be difficult for us to add many new employees between now and Fall 2023, primarily because we are out of space in our office. We don’t require our employees to work in our office five days per week, but many of them choose to do so because they like the work environment.

On the product development side, we launched a new dividend investing newsletter at DividendStocks.com. In the next quarter we will be adding several tools and a bunch of long-form content to the website. We launched a referral program which incentivizes our users to refer their friends, but so far, it’s not driving any meaningful business results. We also launched a Canadian investing newsletter because of strong demand from our advertisers who want to reach a Canadian audience. On the advertising side, we’ve dipped our toes into the world of Regulation A crowdfunding given the strong demand for our audience from private investors looking to raise capital. Overall things are good at MarketBeat, but we don’t currently have any growth catalysts that we see quickly turning us into a $30-$40 million revenue per year company.

We announced the launch of Homegrown Capital’s first fund, Homegrown Capital Fund 1, two months ago. We raised a total of $17.2 million to invest in agricultural technology, financial technology (fintech), and B2B software companies in the Northern Plains. We’ve had conversations with more than 40 companies so far and hope to finalize our first investment in the very near future. Tim has done a great job of running our fund’s day-to-day operations, building relationships, and identifying deal flow. My work is primarily involved with sourcing deals and vetting them as they go through our pipeline.

We recently figured out that we (Cresten Properties) have more than $100 million in new real estate development projects currently under construction, between multi-family apartment complexes, national retail stores, and strip malls. In addition to the six apartment complexes we currently have under construction, we have two Starbucks locations currently under construction at 41st and Tea-Ellis and in front of the Northwest Walmart. We recently closed on land for strip malls at Dawley Farm and across from Jefferson High School in the northwest part of town. I also recently purchased a 50% interest in a strip mall that Kevin Tupy owns located at 55th and Louise. We have a couple of other multi-family and retail projects in various stages of development that will start construction either later this year or early next year.

As an investment strategy, I am all in on commercial real estate. Real-estate currently makes up about 40% of my investment portfolio, with the balance being allocated toward stocks, venture capital investments, cryptocurrencies, and cash (in that order). I’m bullish on commercial real-estate projects, because they generate income, offer tax benefits, allow the use of leverage (bank financing), have relatively stable valuations, and are unlikely to lose value over the long term. As a general partner in Cresten Properties, I am also able to avoid the fees that are commonly charged in syndication deals. We have also seen strong appreciation in our multi-family portfolio in the last two years.

MarketBeat’s philanthropic efforts continue to evolve. We have intentionally not pursued any major new projects this year that will require a significant time commitment from our staff, primarily because we are heads down and have a lot of work to do. Our team continues to actively help Startup Sioux Falls with event planning, website maintenance, and the downtown relocation. We will again be a major sponsor of this year’s community fireworks show on Independence Day at the Sioux Empire Fairgrounds. We plan to bring back the MarketBeat Holiday Plaza for Christmas 2022 with some new and improved elements. We will be a sponsor of a Levitt concert series again this year. We are sponsoring several community events including Innovation Expo, Sioux Falls’ Juneteenth celebration, and Sioux Falls Leadership Summit this year.

One challenge that we’ve had is that we don’t have a process to review philanthropic requests that come into MarketBeat. We receive 50-75 distinct requests for funds each year and our response to each one tends to be somewhat ad hoc based on our relationship with them and how we feel about the project. We plan to replace our existing charitable matching program, which is underutilized, with a new community philanthropy strategy where our team decides where company money is distributed to. We plan to work with Maximizing Excellence, a philanthropic consulting firm, to create and implement this process.

The City of Sioux Falls municipal elections are on April 12th. I was fully anticipating that I would work on a campaign this cycle, but the right opportunity never materialized. I supported several candidates financially through my PAC (Falls Community Growth List) and by providing past donor lists and customized mailing lists, but that was the extent of my participation this cycle. Overall, I think there are clear contrasting choices in the mayoral race and all the city council races. I expect somewhat of a quiet election with low turnout because there isn’t a very competitive mayoral race in play and many voters do not care about city council races.

Here’s how I see the races shaping up:

These are my personal view of the races. I have made campaign contributions to TenHaken, Merkouris, Barranco, and Soehl either personally or through my state PAC.

That’s the update for this quarter. My life is going to change quite a bit both personally and professionally over the next two years. It’s going to be a lot of fun to see how things evolve over time as my business grows and my role in the community grows. The wealth and success that have come my way also come with some major personal, professional, and philanthropic responsibilities. My hope is that my kids turn out alright and that I do some good in the world with what’s been entrusted to me.