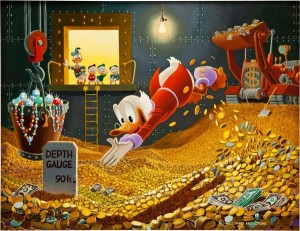 If you’ve spent more than a minute hanging out on internet marketing forums or listening attention to gurus, you’ve been pitched on the idea of generating a passive income stream. In order to get you to sign-up for a service or buy some sort of product, some marketer will sell you on the dream that you can build an easy-to-setup business will generate income for you while you’re doing just about everything but working. And of course, they’ll teach you how to setup passive income generating businesses for just $39.97 (of course, if you really want to learn their secret, you’ll also have to join their private mastermind group for $99.00 per month).

There’s only one problem with passive income businesses. They don’t actually exist. (Tweet This).

There are many entrepreneurs that have businesses that generate income while they sleep, but there’s nothing passive about them. The idea that you can create a business that you only work on a few hours per week that generates significant amounts of income for you is a fairy tale. The mythical 4-Hour Work Week does not exist. There’s nothing passive about building businesses that generate passive income streams. The reality is that successful business owners with “passive income” businesses work really, really hard on their business to generate income when they’re not working. They are compulsive about finding ways to improve and grow their business. Chances are, they are working harder than you do. How do you think they got where they are? Do you think Pat Flynn built a business that generates $50,000 per month in affiliate commissions by working four hours per week? Do you think that Tim Ferris built the “four-hour” brand by working four hours per week? Not a chance.

Yes, you can build your business in such a way that you get paid when you’re not working. I’m living proof. Seven years into building my online business, I can take a day off just about whenever I want and not skip a beat. The problem is that it will never happen if you start off only working a handful of hours per week. You’ll never get anywhere because you didn’t do any work up-front. The occasional four-hour work-week is a luxury for people that have already put thousands of hours of work into building their businesses. If you’re just starting your business, you need to put as much ambition and effort into building and growing your business as possible. If you truly want to have a business that generates passive income, be prepared to put in thousands of hours of work to make that happen.