It’s been about a month since I sent out my last update, but here’s what’s been going on that you might find interesting:

I am hoping to grow MarketBeat to $4 million in revenue in 2018. It did $3.45 million in 2017. I plan on devoting 90% of my work focus to MarketBeat with the remaining 10% to GoGo Photo Contest and Falls Angel Fund. I will also not be starting any new work projects in 2018 so as not to distract from this effort. I plan to achieve this goal by significantly ramping up ad spend from about $40,000 to $70,000 per month, which will allow us to acquire an additional 12,000 to 15,000 email subscribers each month. We’ve also spent a bunch of time reworking our subscription offerings (features, pricing, discounts, etc.) to increase our recurring revenue from subscriptions. We’ve already grown that from about $550,000 in May, 2017 to about $850,000 today. Our hope is to grow subscription revenue to about $1.2 million in 2018. Buying more email sign-ups will also help maintain our engagement and keep advertisers interested in paying to advertise to our list. Finally, we entered into a licensing partnership with LexisNexis which may earn us as much as $10,000 per month in “found money” beginning in January. 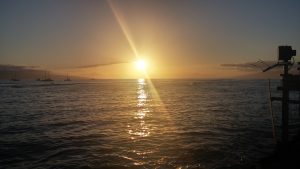 My wife and I are heading to Maui for a week of vacation toward the end of the month. We’re looking forward to spending some time on the beach and taking a helicopter and submarine tour again. This will be our third trip to Maui. My next trip after that is San Diego in late February for the Traffic and Conversion conference. I’ll also be heading to Orlando in March for the Financial Marketing Summit.

I’ve been serving as a volunteer co-chair of our church’s fundraising campaign. The goal is to raise $900,000 over the course of three years to fund the launch of a west campus and make more space in our existing facility to accommodate newcomers. I’ve learned a lot about the dynamics of communicating a kingdom vision to a congregation and the dynamics of church leadership through this process. Overall, I think we’ve done a good job of communicating the vision to our congregation. I think we could have done a better job of driving the mission home to each individual family through small group visits (which we didn’t do) and sharing individual stories of how Faith has impacted the spiritual lives of people in the congregation. It probably wouldn’t be appropriate for me to share specific numbers of how it’s going on this blog post, but I will say that it’s going reasonably well and that we’re not quite at our goal yet.

Falls Angel Fund has been through a bit of a roller coaster in the last 60 days. We learned that Falls Angel Fund couldn’t complete its fifth investment because of the exemption used by the company we wanted to invest in. We would have effectively had to have each member (including LLCs and trusts) to prove they are accredited investors via financial statements, which is a big ask for 31 people to do. Instead, 11 of our members got together (including myself) and decided to make a second fund to invest in this company. In total, we raised an additional $1 million on top of the $1.35 million capitalization of Falls Angel Fund for this deal. The deal hasn’t broken escrow yet, so I can’t share the company’s name just yet. However, I will say that this is strong evidence that there’s plenty of investment money available in Sioux Falls when the right company comes along. We also voted to invest in another company that will likely close in February.

We are moving 1 Million Cups to the Orpheum Theater on February 7th. The new location will provide more room and a better overall environment for the weekly event. The city has been very easy to work with on this project and we’re very thankful that they have accommodated our use of their facility. We have a lot of great speakers lined up this Spring including Al Kurtenbach (Daktronics), Jake Joraanstad (Myriad Mobile), Jason Ball (Sioux Falls Chamber), Laura Benson (Filly Flair) and Sherry Walling (Zen Founder). We will also be significantly improving the live stream with help from Amos Kittelson from Sidewalk Technologies.

We’ve been through several waves of winter illness in our family. Our kids managed to pickup both croup and pink eye over Christmas and we’ve already been through another round of illness since then. I am hoping it begins to warm up soon so that this comes to an end. Micah is beginning to lose his baby teeth, so he recently had his first dentist appointment. Adylin is now able to stay standing if we help her stand up .

That’s about it for now!