Late last year, Stone Group Architects announced that they were transforming an old fire station in Heritage Park into their office building, which would include co-working space on its second floor. Stone Group recently held a ribbon cutting for its new office space, which I had the opportunity to attend. They had about ten workspaces on their second floor, which appeared to be about half occupied. Their co-working space is somewhere between 1,000 and 2,000 square feet and has a mix of standalone executive suites and shared workspace areas. The price for a dedicated space ranges between $350.00 and $550.00 per month and is being marketed through NAI.

Co-Working at First Bank and Trust 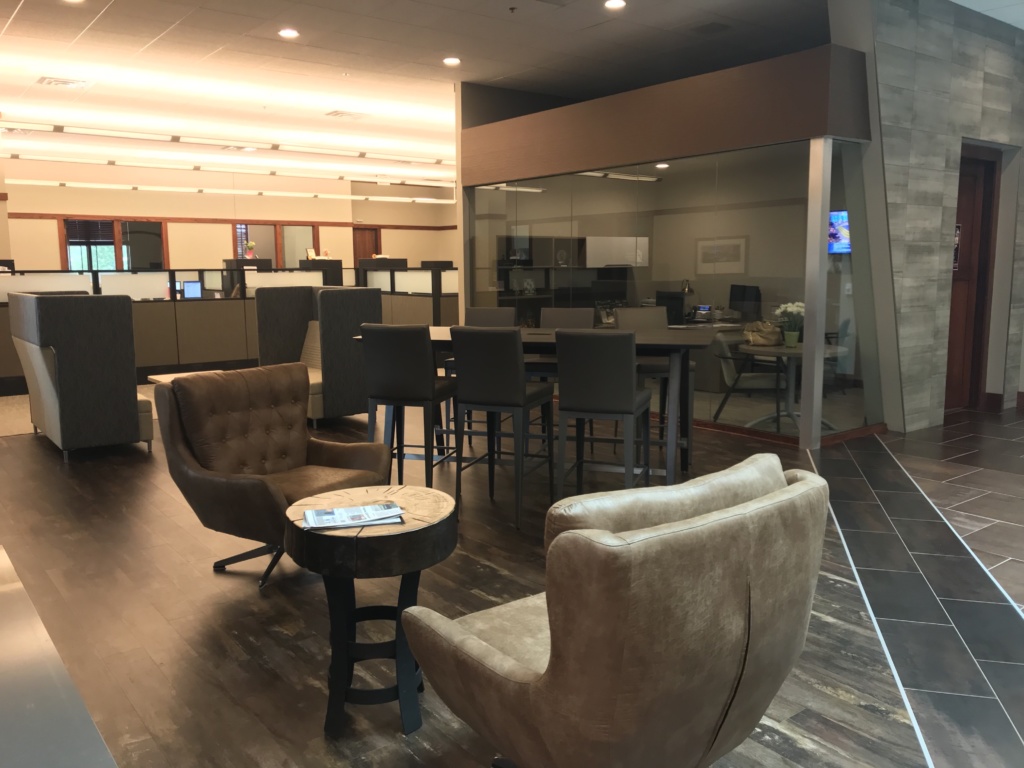 First Bank and Trust (FB&T) also recently opened a co-working space in its 57th and Western branch. There is no cost to use FB&T’s co-working space and the bank hopes that the space will be “a more collaborative and personal environment for customers and employees.” The co-working space contains casual seating areas, a coffee and snack bar, and a community conference room that anyone can use to hold a meeting in. Individuals do not need to be FB&T customers to make use of the co-working space.

While FB&T is the only bank that offers a co-working space, it’s a safe bet that many banks will develop community-use spaces in the years to come. I’ve been told that the new First Premier building on 14th and Minnesota will have a community space that can be used for meetings and events and that another major Sioux Falls bank is eyeing a remodel and looking to repurpose some of its space toward community use. There’s strong competition in the Sioux Falls’ banking industry, and banks will increasingly turn to offering creative perks for its customers, such as community use space, to maintain market share.

Another Co-Working Space in the Works

There is also another co-working space and entrepreneurial development center that is in the early planning stages being organized by a group of Sioux Falls entrepreneurs. I am not personally involved with this project but have been told it will aim to serve historically underserved classes of entrepreneurs including women and minorities. This project may involve a major remodel of a building in downtown Sioux Falls. I don’t want to say too much else about this project, because it’s very early on in the discussion, it has not been publicly announced, and fundraising has not yet begun for this project.

The Zeal Center for Entrepreneurship continues to offer co-working opportunities, executive suites and private offices for entrepreneurs. It has two tiers of co-working available at $99.00 and $249.00 per month. Zeal also has 27 private offices and 6 wet labs available for lease. The occupancy level for Zeal’s standalone offices and executive suites is the highest it’s been in the last several years thanks to demand from companies relocating to Sioux Falls and existing businesses seeking temporary office space. About 90% of the leasable office space at Zeal is being utilized. Zeal also has been averaging between 15 and 20 co-working members at any given time, which is well below its maximum capacity for co-working members.

The Creative Co-Op and 927 Studios are two other small co-working spaces in Sioux Falls. Additionally, Regus offers executive suites for rent in the CNA Surety building in downtown Sioux Falls. Sioux Falls Ministry Center and Sioux Falls Seminary both rent out office space to ministry professionals and organizations that do not need a large standalone office space. Design House, which occupies the former Bakery space, is marketing itself as a co-working space for interior designers. And of course, downtown coffee shops continue to serve as functional co-working spaces for students, entrepreneurs and remote workers alike.

Is co-working still relevant to entrepreneurs in 2019?

How could co-working work in 2019 and beyond?

If someone wanted to build a successful co-working space in Sioux Falls that is relevant to today’s entrepreneur and is operationally feasible, I think it would need these ingredients:

There have been some encouraging developments for co-working in 2019, but I don’t know that any of the new co-working spaces will meet the needs of entrepreneurs or will be especially well utilized. I do think there’s still an opportunity for a sizable downtown co-working space, but we can’t expect it to operate profitably and it needs to really be something special that the entrepreneurial community can get behind.